Ziarul Financiar: A change in the leadership at the forefront of medicines distribution. Fildas Trading, controlled by entrepreneur Anca Vlad, climbs to the first place in distribution, with a turnover of RON 4.2 billion in 2019 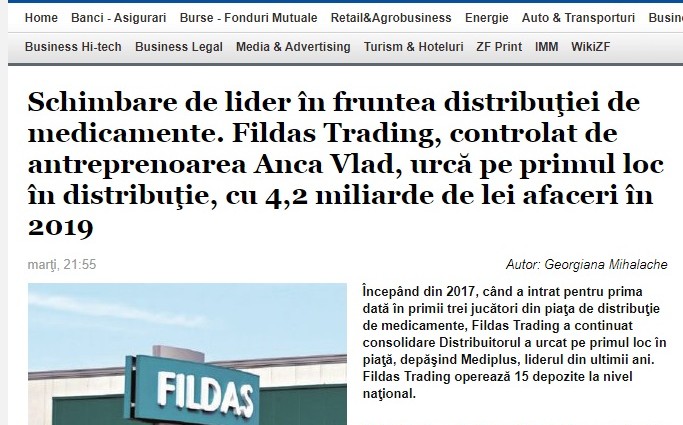 Starting with 2017, when it entered for the first time in the top three players on the medicine distribution market, Fildas Trading continued its consolidation. The distributor ranked first, overtaking Mediplus, leader in recent years. Fildas Trading operates 15 warehouses at national level.

Fildas Trading, the medicine distributor founded by entrepreneur Anca Vlad, posted a turnover of RON 4.2 billion, up 16% compared to the previous year, according to data submitted by company representatives for ZF.

Last year’s result takes the company on the first place on the distribution market, overtaking Mediplus, leader in recent years, which reported a turnover of RON 4 billion in 2019, up 5%, according to ZF calculations.

Fildas Trading’s profit was RON 134 million in 2019, representing an increase of 23%, and the distributor employed over 1,200 persons.

Since 2017, Fildas started a stronger market consolidation, when it ranked for the first time among the top three medicine distributors, overtaking Farmexim. Subsequently, in 2019, it ranked second, after outpacing Farmexpert (currently Alliance Healthcare) in terms of turnover.

According to the latest data, distributor Fildas supplies products to the over 800 Catena pharmacies in the country, as well as other over 1,000 clients with about 3,500 places of business, which means half of the total number of pharmacies at national level. The company holds a fleet consisting of about 130 vans and 12 heavy trucks, having over 1,100 employees.

The company’s portfolio increased year after year, currently Fildas Trading distributing over 11,000 products, from around 150 producers.

In total, Fildas has 15 warehouses in some of the largest cities of the country, after last year it opened a new warehouse in Craiova, with an area of 10,000sqm, an investment of EUR 1.5 million.