Fildas Trading – in Top 500 Companies in Central and Eastern Europe, conducted by COFACE

Fildas Trading, a company specialising in the distribution of pharmaceuticals, entered the Top 500 of the largest companies in Central and Eastern Europe for the first time, conducted by Coface consultancy and economic analysis company, and recently released.

Romania has 65 companies in this ranking, compared to 63 in the previous year, holding the fourth place in the region. Poland, ranked first, has 168 companies in the top, while Hungary and the Czech Republic, the countries ranked on the other two places, have 75 and 71 companies respectively.

Of the 65 Romanian companies present in the Top 500 Coface, only 7 are entrepreneurial companies, Fildas Trading being the fifth by top ranking. 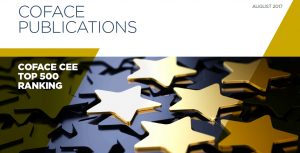 According to data from the Coface study, the aggregate turnover of the top companies in our country reached 57.9 billion EUR, while the net profit went up to 2.5 billion EUR. Moreover, 241,000 employees work in the top 65 Romanian companies.

The first Romanian company in the ranking conducted by Coface is Automobile Dacia, on the 14th place with a turnover of 4.5 billion EUR, the next two are OMV Petrom Marketing (23rd in the top 500) and OMV Petrom (31st place).

The largest company in Central and Eastern Europe by turnover is the Polish Oil Group PKN Orlen (18 billion EUR in 2016), followed by the Czechs from Skoda (with business of 12.8 billion EUR last year) and MOL in Hungary, with 11.4 billion EUR.